Where The Sidewalk Ends


Those eyes, that right hook, that penmanship! It could be no one else but Dana Andrews! 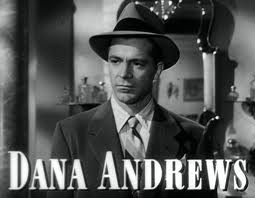 From The Ox-Bow Incident with Henry Fonda and Daisy Kenyon with Joan Crawford, to The Devil's Brigade with William Holden and The Last Tycoon with Robert DeNiro, Andrews has worked with just about everyone of note through a career that spanned over four decades.  He is most recognized, however, for his string of noir films from the late 40's through the early 60s.  One of my personal favorites from his filmography is Where The Sidewalk Ends.

Otto Preminger directed a number of gritty crime dramas for Fox in the late 40's including Laura, which like Sidewalk also starred Andrews and Gene Tierney. Although Laura received more critical acclaim, I personally prefer Sidewalk as it feels a little more realistic, a little deeper, and definitely grittier and less aimed at the movie-going mainstream. It feels more like a labor of love than a contractual obligation, if that makes sense.

A brief recap of the film - Andrews plays Detective Mark Dixon, the son of a two bit crook, who became a cop to put away hoods and clean up the streets. During an investigation Dixon accidentally kills Ken Paine, a suspect in a murder with ties to local gangsters. While trying to cover it up to save his own hide, Dixon makes a cab driver the prime suspect, who is Payne's father-in-law, and subsequently the father of the woman Dixon falls for. Dixon then tries to divert blame to local gangster Scalise while battling with the guilt of the crime he committed, "walking around half cop and half killer". 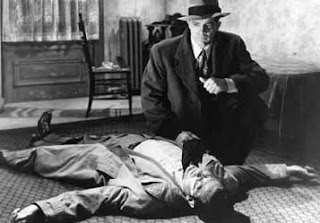 Andrews is perfect for roles where the character's sense of self preservation and conflicting morals need to ooze off the screen. I believe Andrews would be what you'd get if James Cagney and Buster Keaton had a child together.  He can pull off the role of the sympathetic heavy, but like Keaton can own a scene with the bat of an eye.  The scene in Sidewalk where he receives a phone call from his partner after just killing Paine where he's informed Paine is a war hero and shouldn't be harmed needs little, if any, words from Andrews' character. The range of emotions he goes through just from the look on his face makes very clear the internal conflict he's dealing with.

Preminger's direction subconsciously makes the viewer sympathetic to Dixon's troubles. In most of the scenes he is the outcast, standing on the outside of conversations, gatherings, always in the background a little, brooding, maybe battling his inner demons. Andrews has the kind of face that is perfect for this role. Again like Keaton, he is both cold and emotionless while simultaneously pitiful and the guy you want things to work out for.

While the film may not be as revered as Laura or other noir flicks from the period like Sunset Blvd or The Stranger, Where the Sidewalk Ends is a quick paced, entertaining look at the underbelly of 1940's Manhattan and how the best intentions can still land us in a mess. Although Andrews was pretty much typecast by this point, he plays the role well.  Those big sympathetic eyes and square build make him almost made for the role of the well-meaning bad guy, or the flawed but sympathetic good guy, where ever you choose to file him. 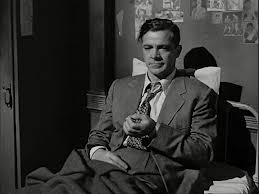 Before I found this writing topic I couldn't have picked Dana Andrews out of a line up just by his name. It's weird because he's who I picture when I think of noir films - I think he's pretty much the poster child for the genre. I just never knew his name. A recognizable face and an actor in a ton of movies I love, I'm really glad I took the opportunity to learn more about him.  He was one of the underdogs of Hollywood, a talented actor with a solid filmography, was all over the place for decades, but another star that you don't really hear about today.


You can learn tons more about Dana Andrews and his films from the blogathon happening at http://classicmovieman.blogspot.com/!
Posted by WhatHappnd2Hollywood at 11:12 PM 11 comments

The Hollywood sign is celebrating it's 89th anniversary this month.  I've tried 3 times to get up close and personal with it, the first time we were run off by what I think were park rangers, the second time there were helicopters flying overhead every 5 minutes, and the 3rd time, trying to be sneaky and come at it from the backside of the hills, I fell and busted my ass so bad I gave up on it.  I guess you have to either be well connected or a ninja to get close.  I am neither. 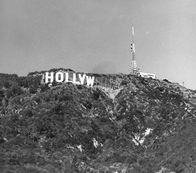 To most people, it's a symbol of the American dream, and a carryover from old Hollywood. To some it's the ultimate logo for crushed hopes, dashed dreams, and the darker side of the city.  It's gone through many phases over the decades and was even almost removed, but it still looms over the city today just as it did when it was first built in 1923. 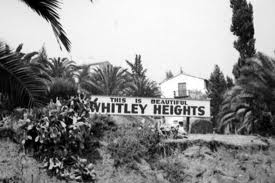 It used to say "Hollywoodland", and wasn't meant to be a cultural icon, it was meant to advertise new housing developments in the hills below.  The owner of the development, HJ Whitley, had seen an uptick in traffic to the newly developed Whitley Heights neighborhood thanks to a large sign, so he decided he'd try the same marketing ploy again. It cost 21,000. to build, each letter was 30' x 50', and it was adorned with over 4000 light bulbs. It was only meant to stay up for a year, but obviously it outlasted it's expiration date.

The sign was lit until 1939.  It would flash in 3 sections until the city deemed it too expensive and the neighbors below saw it as a traffic hazard and annoyance. In the 40's the Beachwood neighborhood hated it so much they petitioned the city to take it down, as it hadn't been kept up and was an eyesore amongst the million dollar homes adorning the hillside and below.  In 1949 the Hollywood Chamber of Commerce repaired it and removed the "land". Faced with having to foot the bill for illuminating the sign, the city decided to not replace the bulbs. 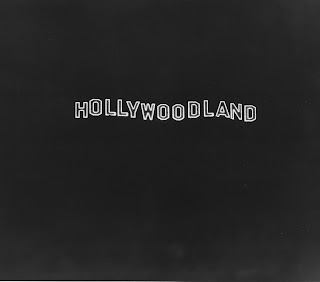 In 1973 Gloria Swanson funded a complete rehab of the sign, but 5 years later due to termites, arsonists, and inclimate weather, it had fallen again into a state of disrepair.  The city decided in 1978 that it would have to be completely rebuilt, this time costing 250,000. In August, after celebrity fundraising and sponsorship for the sign, the original was demolished and the hill sat empty for the first time in 50 years. The steel and concrete enforced replacement is erected in November to celebrate the city's 75th anniversary. 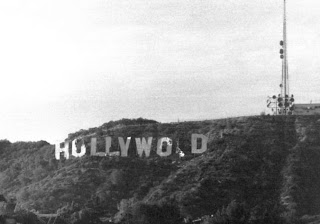 They've added a fence, a high tech security system, Angelenos have repeatedly had to petition to save the land around the sign from over-development (most notably, Hugh Hefner and the Save the Peak campaign - some idiot developer wanted to build luxury condos right behind it). It's been driven into, set on fire, jumped off of, petitioned for removal, and almost eradicated by bugs and natural causes, but unlike many historic monuments around town, this is one we apparently aren't willing to let die. 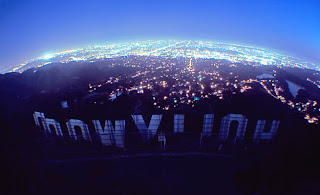 Posted by WhatHappnd2Hollywood at 3:22 AM 2 comments

Being a classic film fanatic is kind of a bummer.

I don't watch a lot of new movies.  Im also not particularly thrilled with how society conducts itself these days. In my head, I would like to think that growing up in the eras of not having to lock your doors, carry mace, or be bombarded with CGI infested advertisement 24/7 made life better and more fufilling.  Maybe that's just wishful thinking, but these days everything from our entertainment to our government just seem empty and lifeless. 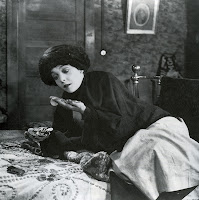 I watch old movies not just because the stories and acting are far superior to 90% of the crap the machine spits out today, but because it's a window into the fashions, mannerisms, and humanity of a bygone era.  Knowing its a bygone era, makes it all the more depressing.  You're not going to have a congressman filibustering congress for 2 days straight to save a boys camp and the accountability of our government today.  You aren't going to see tyrants giving whole-hearted speeches about how we all need to be there for one another and not let the government make us slaves via wars they concoct from greed, and you certainly won't see wealthy crime bosses falling in love with an orphanage and risking their freedom to save it from tyranny. (points if you know what movies I'm talking about).  Yeah, they are just movies. But where are those glimmers of hope for humanity in today's blockbusters?  Not in Bridesmaids, or Twilight, or any of the watered down remakes they are putting out. Shouldnt one of the duties of the entertainment industry be enlightenment over brain dead scripts and computer trickery? 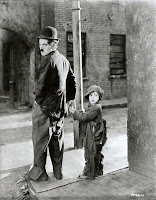 To top off the cultural differences of then and now, all our favorite stars have either passed on or are at deaths door.  Andy Griffith died today, there's rumors around Hollywood that Joan Fontaine is not far off, and it just exacerbates that disconnected feeling when you look around and realize you are way more affected by what happens to Mickey Rooney than Seth Rogen. 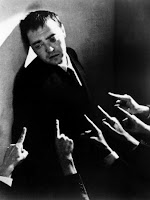 I know I should be grateful that we had that wonderful era of political conscience and humanity in movies to look back upon (Greed, Metropolis, Grapes of Wrath, etc etc) but it kind of makes the present feel like it's missing something.  Something big.

A lot of folks say its a lack of religion, but seriously, that is more in your face than ever. It seems it was more okay to be an atheist in the 20s than it now. Others say its maniacal greed and empowerment of corporations, and while yes it's intensified, its always been there. Someone wrote me a while ago and said what caused the problem was when men stopped wearing top hats and women stopped wearing gloves, it took away our politeness and class and respect.  Maybe so. Or finally, maybe it's because when we were tending crops, building our own homes, and working, really working hard for ourselves and not faceless CEOs, we had something better to do aside from sit around, pick each other apart, and wish we'd been born 50 years ago. 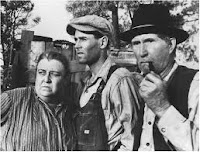 I can't put my finger on it. I just know it bums me out that in such a short time we've changed so much, and not necessarily for the better. I feel like the man on the train in that Twilight Zone episode about that town called Willoughby, where time goes slower, people smile and say good morning . . .  Would I prefer now to then if I'd actually lived it? Who knows.
Posted by WhatHappnd2Hollywood at 11:00 AM 11 comments