There are literally thousands of people that we see in the background of film history in dozens of movies but never really hear about. So many character actors and bit-players whose faces we recognize instantly, who make or break so many movies, that we struggle with when trying to recall their name. The What a Character blogathon is dedicated to these folks who made the movies feel whole. 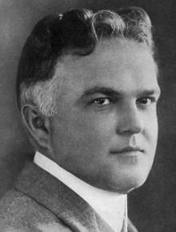 One of my favorite character actors is Victor Moore.  He worked with everyone from George Cohan, Bob Hope , and Mae West,  to Fred and Ginger and Marilyn Monroe.  Co-starring in over 50 films and 21 broadway productions, Moore had more background in stage acting than half his peers by the age of 30.

Born in New Jersey in 1876, Moore made his major stage debut in the presence of Barrymores (Ethel, to be exact) with 1896's Rosemary. A vaudeville actor from the late 1800's through the late 1920's with his first wife, Moore had always had a comedic slant in his performances. Even around major broadway productions he kept the stage act he'd nurtured since his teens.  Arthur Hopkins recalled, “The timid Moore, who even in those days, was mostly hips, would waddle to the footlights and beseech the spotlight man in the gallery, as though reluctant to remind him, ‘Mister, hey, mister, spotlight, you know, mister, you know like we rehearsed—spotlight.’”

He was "discovered" and cast by George Cohan in 1906's 45 Minutes From Broadway and it's sequel The Talk of New York. Even though he'd already been on the stage for almost 30 years, these productions are considered his breakout performances. Just a few years later, he began his career in film, where 2 of his first 3 silent movies were directed by a little known up-and-comer, Cecil B Demille. 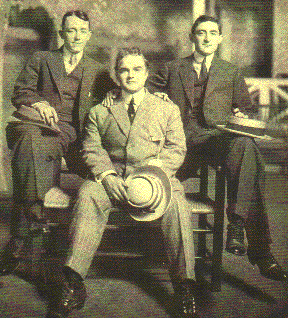 Moore, often typecast as the bumbling but well-meaning comedic relief, had numerous standouts in his 60 year career.  On stage he is best known for Gershwin's Of Thee I Sing, and you can find his face in numerous classics like Swingtime, Ziegfeld Follies, and We're Not Married.

His major standout on film was 1937's Make way for Tomorrow, a really sad movie, where he was cast against type as the straight man, about an elderly couple and their self-absorbed children. Moore received overwhelmingly positive reviews, even winning over one of his greatest critics:  Orson Welles once said he hated Victor Moore, calling him "A professional Irishman", but that in that film, he was "absolutely wonderful".  Leo McCarey directed Make Way, and that year won an academy award for his other film The Awful Truth. When he accepted the best director trophy, he said "thank you, but you gave it to me for the wrong picture."  Many critics feel Moore was also robbed of the best actor academy award that year (he wasn't even nominated); It went to Spencer Tracy for Captains Courageous, which many felt was a supporting role.

His oddest film appearance was as an animated cartoon character in the 1945 Daffy Duck short Aint That Ducky. It is said that Moore was so happy with the animated version of himself he offered to do the voice overs for free, provided that the animators gave him a little more hair.

The film that brought Moore to my attention was Swingtime. His buffoonery paired with Astaire's charm is a match made in heaven in my book. The scene where he and Helen Broderick try to mimic Fred and Ginger makes me laugh so hard, Im not sure if there's a greater comedic moment in the whole film for him. But then there's the sandwich stealing. And packing Astaire's suitcase.  Okay, I take it back,  most of his scenes in Swingtime were pretty stellar. 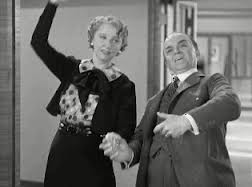 Moore's final film appearance was a cameo as the plumber in Seven Year Itch, and his final stage appearances were as Gramps in a 1953 revival of On Borrowed Time and as the Starkeeper in a 1957 revival of Carousel. He passed at the age of 86.

Im really kind of dissapointed in the internet on this one.  I'm used to having to dig a little to find info on the not-so-huge folks from my favorite films, but it's as if Victor hardly existed out there.  The man has a seriously impressive filmography, literally worked with everyone of note "before they were huge", he's got a star on the Blvd, and yet, after days of looking, the info in this post is all I could really find asides from mundane stuff, there's a building named for him in New York, had 3 kids, 2 wives - first one until her death, second was 40 yrs his junior until his death, yadda yadda.  I learned a few things, which is the main reason I do this, but it feels kind of half-assed, or like an afterthought, which this guy (and so many others) shouldn't be!  I might have to make a trip to the Heritage Museum to learn more (the folks that work there live and breathe classic hollywood, and they seem to have film history on lock) because now I'm even more curious about the guy. Thank you for the laughs, Mr. Moore! 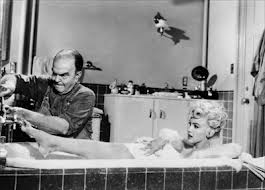 Posted by WhatHappnd2Hollywood at 10:43 PM